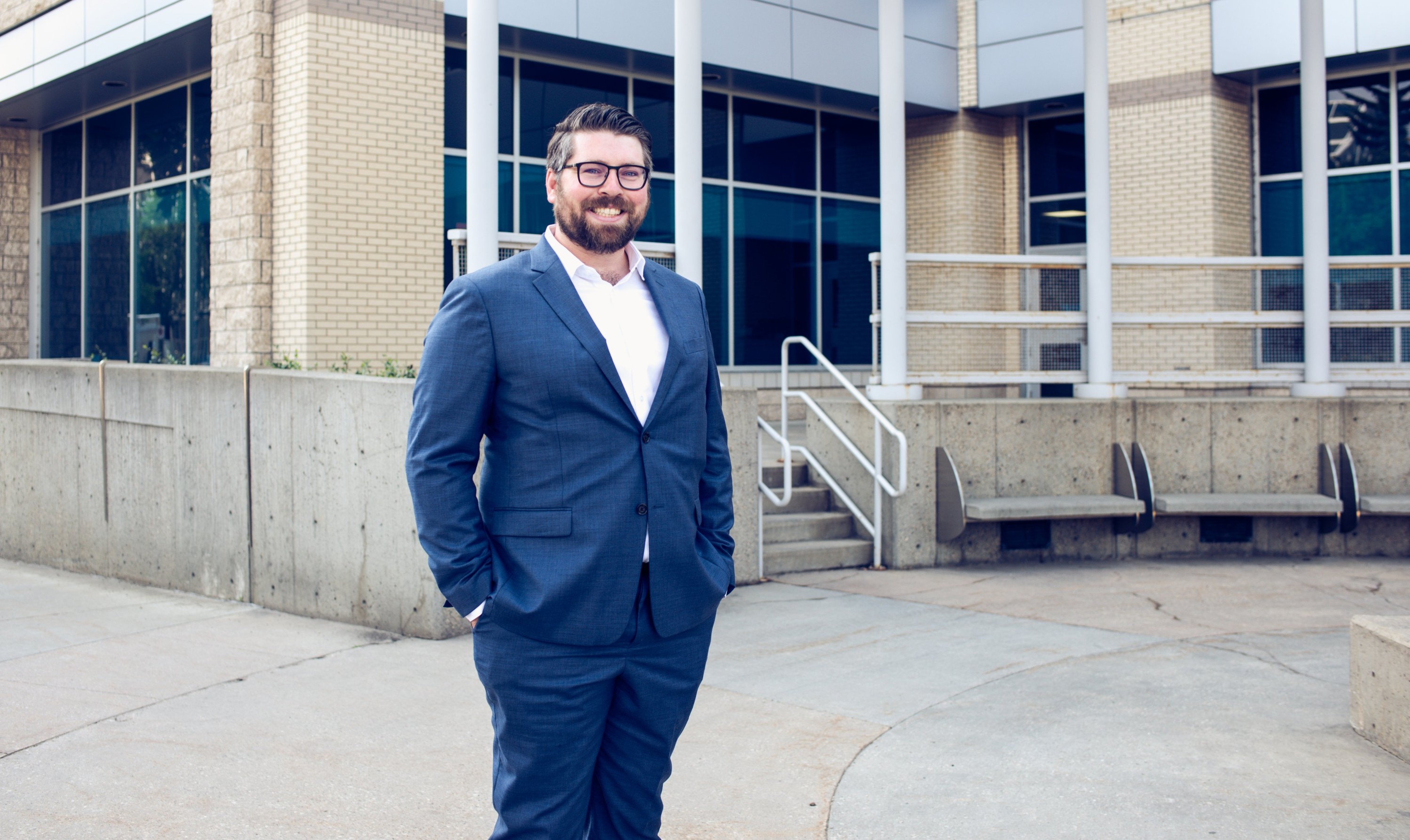 The Canadian Critical Drug Initiative aims to transform Alberta into a powerhouse in the development of life-saving therapies.

Andrew MacIsaac, CEO of Applied Pharmaceutical Innovation, an industry-led non-profit, says a partnership with the University of Alberta will help to fill urgent gaps in Canada’s pharmaceutical supply chain — and get new life-saving treatments to market faster. (Photo: API)

A gap in homegrown drug manufacturing means that Canadians are at the mercy of the global supply chain when it comes to ensuring they have access to the drugs they need.

Around 80 per cent of the raw ingredients for the world’s drugs are made in only two countries: China and India, according to a 2020 report by the federal Patented Medicine Prices Review Board.

“If anything goes wrong with those factories, it can be catastrophic for the world,” said Andrew MacIsaac, CEO of Applied Pharmaceutical Innovation.

That’s why API, an industry-led Edmonton non-profit, is partnering with the University of Alberta’s Li Ka Shing Applied Virology Institute to create the Canadian Critical Drug Initiative (CCDI). According to MacIsaac, the partnership will help Canada gain a critical lifeline in the production of small-molecule drugs, which represent the majority of drugs administered in the country.

“Small-molecule drugs are the backbone of the health-care system,” said MacIsaac.

What are small-molecule drugs?

Small-molecule drugs are made from compounds manufactured through chemical synthesis and with low molecular weights, which allow them to easily pass through cell membranes to have their intended therapeutic effects. These include drugs such as ibuprofen and propofol, a common anesthetic.

Biologics — a newer class of drugs — are larger molecules, usually proteins, that are extracted and purified from living cells. These include vaccines and antibody therapies.

Factory shutdowns and soaring shipping costs caused by the COVID-19 pandemic have prompted many retailers to warn customers about empty shelves and higher prices this holiday season. Drugs have not been immune to the disruption, with around 1,400 drugs currently in short supply in Canada, according to a federal database.

In an effort to grow domestic pharmaceutical manufacturing capacity, the Government of Canada has committed millions of dollars in investments in vaccine production facilities across the county, and launched a national biomanufacturing and life sciences strategy. The CCDI would be a critical component of the strategy, as its proposed 40,000-sq.-ft. facility in Edmonton will be able to produce 70 million vials annually of a wide range of small-molecule drugs, a capacity MacIsaac said is in short supply in Canada.

“The facility will have a number of critical drugs on standby, with the ability to fill supply gaps across Canada if needed,” he said.

Getting new treatments to market faster

Along with MacIsaac, CCDI is led by a team of experts, including the director of the Li Ka Shing Applied Virology Institute — Michael Houghton, who received the 2020 Nobel Prize in Physiology or Medicine, and Lorne Tyrrell, a renowned U of A virologist. In addition to boosting Canada’s capacity to manufacture small-molecule drugs, CCDI will also help to produce life-saving therapies faster — by producing drugs for clinical trials and creating industry partnerships that will allow the entire research, development and production cycle to take place in the Edmonton area.

Tyrrell said this will spur economic investment in the area.

“Creating a new drug is complex and expensive,” said Tyrrell, who is also founder and director of the Li Ka Shing Institute of Virology. “But if successful, the payoff can be huge.”

A 2020 study of drugs approved in the United States found the average cost of research and development for one drug to be around US$1.3 billion.

“Without the facilities, the investments and the talent, drug researchers often have no choice but to partner with established drug companies often outside their region to bring products to market,” Tyrrell said.

It’s a reality Tyrrell knows well. In the mid-1980s, he and Morris Robins, a former U of A chemistry professor, worked on developing the first oral drug to treat hepatitis B. The pair partnered with Glaxo Canada to fund their research and lead the identification of several active compounds including lamivudine. By 1998, lamivudine was approved in Canada and the United States and has since been licensed as a treatment for hepatitis B in more than 200 countries — generating more than $12 billion in cumulative sales.

“Just imagine if we did all the work to bring new therapies to market right here in the Edmonton region,” Tyrrell said.

The Li Ka Shing Applied Virology Institute is developing vaccines for hepatitis C, group A streptococcus and COVID-19, as well as potential therapeutics to treat Alzheimer’s and cancer, among other diseases. Tyrrell said the CCDI could not only speed up the development of these types of breakthroughs and support drug development at universities across Canada, but also keep the potential economic benefits within the country.

In just three years since it was founded, Applied Pharmaceutical Innovation has already built a solid reputation and track record in the Edmonton region — assisting more than 30 life science companies with their commercial research and development, and training dozens of students from across Alberta in sciences and medical fields to work directly with industry.

Another key manufacturer working alongside API in Edmonton is Gilead Sciences, which operates a large manufacturing site in Edmonton with around 500 employees and is the site for the production of remdesivir — the first treatment approved for COVID-19 in the United States and Canada.

CCDI will expand Canada’s talent “pipeline” further by partnering with the Universities of Ottawa and Montreal to train students at the U of A and other Canadian post-secondary institutions in the latest pharmaceutical chemistry techniques, said MacIsaac.

“Alberta’s oil and gas industry has created an incredible pool of engineering and chemistry expertise — expertise that can be translated into drug development,” he said. “Alberta’s strong agricultural industry is also poised to provide the raw ingredients needed for drug development.”

MacIsaac estimates that once the CCDI is up and running, an additional 500 to 1,000 high-paying jobs in drug development are expected to be created in the Edmonton region — not to mention additional employment in support and spinoff industries.

This article originally appeared on Folio on, the brand journalism site of the University of Alberta, on November 02, 2021.